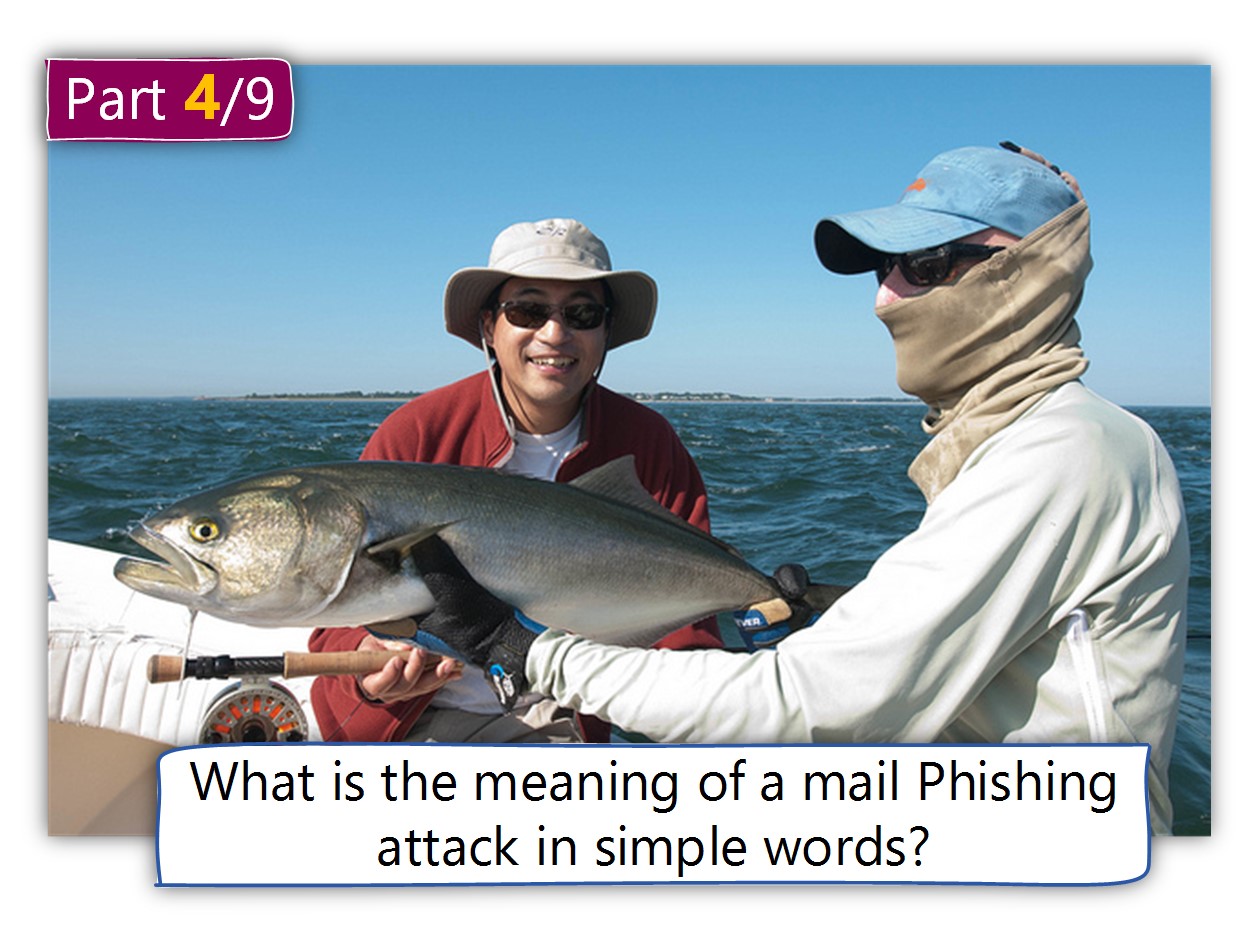 Post Views: 6,702
In the current article, we will continue our journey to the land of “mail threats and dangers,” and this time; our primary focus will be on one of the most dangerous and deadly types of mail attack – the Phishing mail attack!

The main points that I would like to emphasize regarding Phishing mail attack are:

Phishing mail attack? Who, What, Where and when

Let’s start with a formal definition of Phishing mail attack as described by the Wikipedia:

Phishing is the attempt to acquire sensitive information such as usernames, passwords, and credit card details (and sometimes, indirectly, money), often for malicious reasons, by masquerading as a trustworthy entity in an electronic communication.

The word is a neologism created as a homophone of fishing due to the similarity of using a bait in an attempt to catch a victim.

Phishing emails may contain links to websites that infected with malware.

Phishing is typically carried out by email spoofing or instant messaging, and it often directs users to enter details at a fake website whose look and feel are almost identical to the legitimate one.

Phishing is an example of social engineering techniques used to deceive users and exploits the poor usability of current web security technologies.

Why should I spend my time on getting to know better the character of Phishing mail attacks?

The answer is that if we want to know of to protect our organization from Phishing mail attack, we need to know our “enemy,” the way he thinks, the way he attacks, the characters of the attack and so on.

The need to recognize the characters of Phishing mail attack is “our need,” and also “our users need.”

We need to be familiar with the characters of Phishing mail attack, so we will be able to create and configure the required defense mechanism + to be able to instruct our users.

What is the reason for the strange term Phishing?

As a child, I loved to fish.

I have a picture in mind of an endless blue sea.

You throw the bait into the deep and blue water, and patiently wait for the “strong pull,” in which you know that the fish bit the bait.

The same concept is implemented in a Phishing attack.

The fisherman prepares the bait (the attacker creates the Phishing mail), and “throw” his bait in the big blow sea. In our scenario – the list of the destination recipients who could become his potential victims.

The fisherman (the attacker) doesn’t know if there are any fishes in the “sea” and if a particular fish decides to bite the bait.

All he can do is – waiting patiently for the “strong pull,” in which you know that the fish bit the hook.

The different flavor of Phishing attack

It’s important that we will be aware of the fact that the term “Phishing attack,” is not translated automatically only to Phishing mail attack.

The opposite is true; Phishing mail attack is only a particular flavor of “Phishing attack.”

The mechanism of “Phishing attack” can be implemented via different channels such as:

In our specific article, we relate only to the flavor of – “Mail Phishing attack” but most of the information about the characters and the logic of “Phishing attack,” is identical to all the types of the different flavors.

The Phishing mail attack is based on a very simple concept of – finding the weakest link in the chain and via the “weakest link” access additional territory.

For example – the Phishing mail attack was designed to use social engineering for addressing a particular human weakness. The attacker is tempting the victim “to do something” such as open a particular file.

For this reason, Phishing mail attack belongs to the notorious family of “new type of attacks” that describe as – advanced threats.

The characters of a “simple Phishing mail attack” could be translated into a simple, very easy to identify the attack because that attacker made a very little effort to execute a “professional attack.”

For example, the characters of “nonprofessional Phishing mail attack” will include the following characters.

The attacker will not make the required effort to use an applying identity or well-known E-mail address and instead; we use a general E-mail address from a public mail provider such a GMAIL and so on.

The style of the Phishing mail will be very simple and will not mimic the “look and feel” of the mail style that the “original organization” uses.

Phishing mail connects will not include a sophisticated social engineering method which should convince the victim to do something and instead, will include a very simple request such as – “please open the following file” (the malware file).

The attacker can invest resources in research and find information about you and your manager and use not just a “simple identity” of the user from your organization but a very distinct identity such as your manager identity.

The “destination victim” that the attacker tries to attack is not a random list of Potential victims, but instead, a very particular target recipient. The attacker invests the required time to learn about the company structure, the particular persons that hold a key position (CFO, CEO, etc.).

The attacker will invest the required resources for

The level of sophistication can also be expressed in the specific social engineering method or narrative that the attacker uses as the Phishing mail content.

A Professional attacker will craft “good content” that includes a proper incentive to do the particular “thing” that’s appealing to you or relevant to you as a person.

Regarding the subject of Phishing mail attack logic, the logic is quite simple:

The attacker tries to present an identity that can be trusted by the victim, and then, ask him to “do something” (bitten the bait) that will “activate” the attack.

The basic structure of Phishing mail includes the flowing parts:

This is the part, in which the attacker is trying to “establish a relationship” with the victim.
Very similar to the logic of a “Business Card.”
The message is – I am a reliable and trusted the person. You can trust me and trust the “thing” that I will ask you to do below.

Part B – The “Call to Action” part

1. The “logic” for doing the concrete action

Before I ask you to do something, I want to explain and convince you to read the reason for doing the particular action.

This is the part, in which the attacker explicitly stated what is the “action” that he asks from the victim to do.
Most of the time, the “action” will be:

What is the “thing” that the attacker asks the victim to do?

The Phishing mail attack includes a link (URL address) to a particular website.
The website serves as the “trap,” that the attacker had already prepared.

There could be a couple of variations to the Phishing website which the attacker is redirecting his victims too:

2. Click on a malware file that is attached to the Phishing mail

The other type of Phishing mail attack is straighter forward.

The attacker doesn’t convince the victim to access a particular website and then download and “activate” a specific file (malware) but instead, attached the malware directly to the E-mail message.

In case that you think – “hahaha, my mail infrastructure will block any type of executable files, and for this reason, my mail security infrastructure will prevent this scenario (a scenario in which the E-mail message includes executable file), the bad news is that in nowadays, most of the malware appear as a legitimate Innocent file such as – Microsoft Office document (Word document, Excel document and so on).

One of the most famous and deadliest Phishing mail attacks is the attack that includes the Ransomware malware that appears as a legitimate attachment.

When the victim opens the “Innocent attachment,” the malware encrypts the victim’s hard disk and asks for ransomware!

The header is a little dramatic.

Note – In case the “title” makes you feel slightly angry because the article includes instructions that can be used by the “dark side” to become better at planning a Phishing mail attack, don’t worry.

The “bad guy” doesn’t need my help and my guidelines. They are professionals who master this field.

In this step, the attacker makes all the necessary preparations that will serve as the building block for the Phishing mail attacks.

Decide what are the target victims.

The attacker needs to decide who are the “destination victims.”
For example – a Phishing mail attack that will be targeting a specific organization or a particular target recipient in the organization (Spear phishing).

Another option has sent the Phishing mail attack to a harvest E-mail address list.

In a scenario of Spear phishing, the attacker will conduct research about the role of the particular recipient whom he wants to attack, his relationship with other organization users, etc.

Decide, which spoofed identity to use

The attacker can choose from a wide range of “spoofed identities” beginning with a very general sender identity, and ending with selecting a spoofed identity that uses the domain name of the target victim and even the identity of a very specific user.

Plan and design the style of the E-mail message.

In a “sophisticated” Phishing mail attack, the attacker will spend effort in crafting an E-mail message that will mimic that exact style of the “original E-mail message” that is used by the particular organization. For example, mimic the exact signature of the user whom he spoofs his identity.

Choosing the particular human weakness that will be exploited by using social engineering.

The attacker will need to decide about the specific “human weakness” that he is going to target.

In the following diagram, we can see the part of the initial phase of the Phishing mail attack

The additional part of the preparation phase could be:

This is the phase in which the attacker needs to find a mail server that will be used for distributing the Phishing E-mail message.

The Phishing mail is just a “bridge” or a “gateway “to the main course of the meal – the specific attack that the hostile element wants to execute.

Theoretically, there is no limit to the type of “attacks” that can execute.

The most common type of attacks is:

A very well-known and deadly attack is the “Ransomware virus” which will encrypt the local hard drive.

Another successful Phishing mail attacks are – attacks in which the victim is asked to click on a link that will lead him to a website that was created or controlled by the attacker.

Assuming that you have to manage to complete all the above steps successfully, you are entitled to describe as a “proud Phishing mail attacker”!

The next article in the current article series is Article Name
What is the meaning of mail Phishing attack in simple words? | Part 4#9
Description
In the current article, we will continue our journey to the land of “mail threats and dangers,” and this time; our primary focus will be on one of the most dangerous and deadly types of mail attack – the Phishing mail attack!
Author
Eyal Doron
Publisher Name
o365info.com
Publisher Logo