skip to Main Content
In the current article, we continue to review different concepts and components that relate and involved throughout the process of restoring Exchange Online mailbox.
We will start by describing a concept which I define as “Falling domino effect,” that relates to the chain of an event in an Office 365 based environment when a “deletion action” is executed, and when a “restore operation” is executed.

In the second part of the article, I would like to briefly review the concept of – “recycle bin” in On-Premises environment and Office 365 based environment. 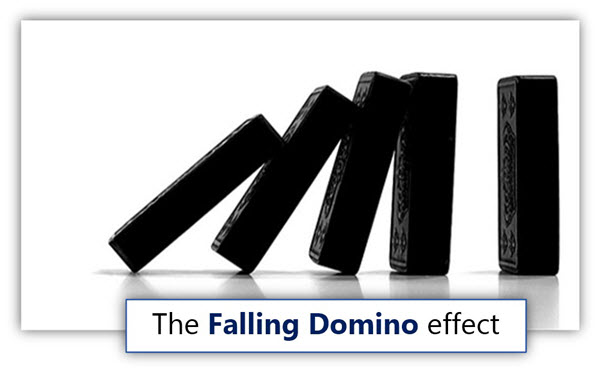 Q1: What happened in the case that we “break” the connection which exists between a user and his Exchange Online mailbox by deleting the mailbox owner user account?

A1: in this case, the concept of the “Falling domino effect” will be realized in the following way:

Q2: What happened in a restore scenario in which we restore one spouse deleted?

A2: The concept of the “Falling domino effect” will also be realized in the event of “restoration.” 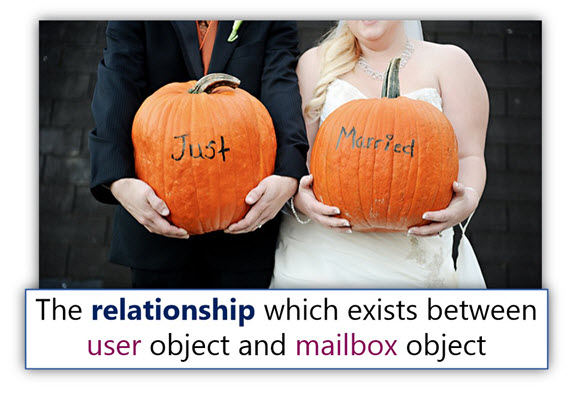 The relationship which exists between user object and mailbox object in a “deletion event,” are similar to the Shakespeare’s play – Romeo and Juliet, in which when one of the lovers dies, the other spouses committed suicide. 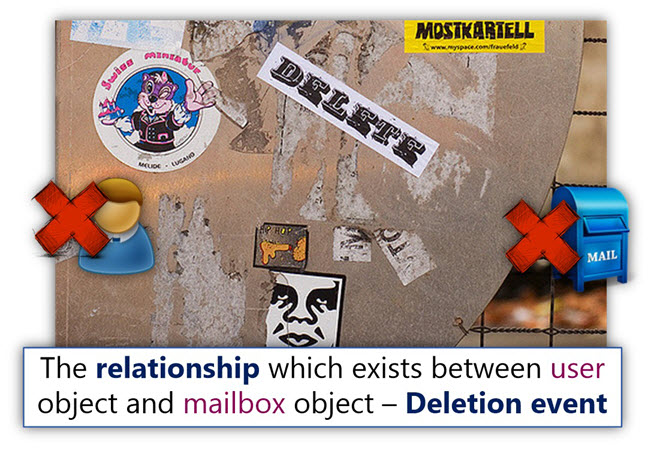 When one spouse dies (deleted), the death of the “spouse”, causing the death (deletion) of the other spouse

I’m not sure regarding the exact logic of this “projection, ” but I assume that the logic was that – if we delete an Active Directory user account, we probably want to delete or remove, all the data that were related to this user such as – Exchange mailbox. 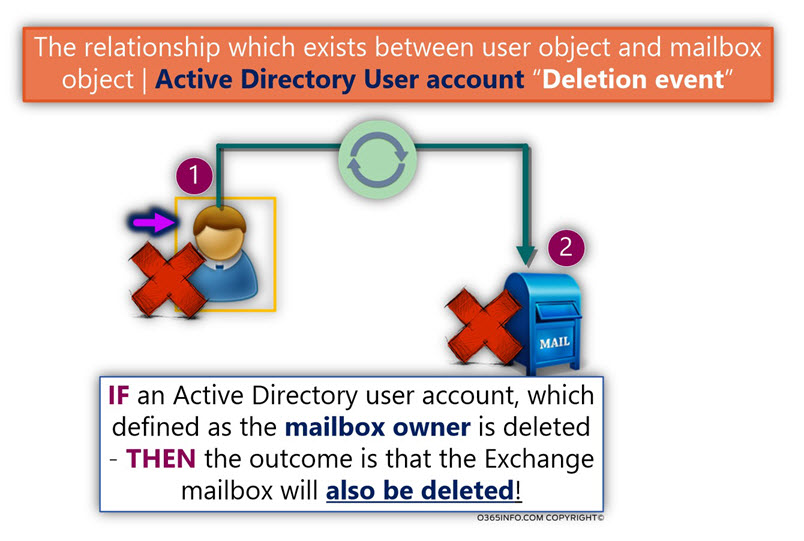 In this case, an Exchange mailbox deleted, the consequence will be – a deletion of the Active Directory user account that considers as the mailbox owner.

Note – as mentioned, in Exchange on-Premises we can use the option of – “Disable mailbox” if we don’t want to delete the Active Directory user account that is associated with the Exchange mailbox.

And again, I’m not sure that I fully understand the logic of the “chain of events.”
My opinion is that – technically, there is no logic reason for the process of – deleting a user account when his Exchange Online mailbox is deleted.

Despite this strange behavior, it’s important to emphasize that this is “the way things happen” in Exchange Online and Active Directory environment. 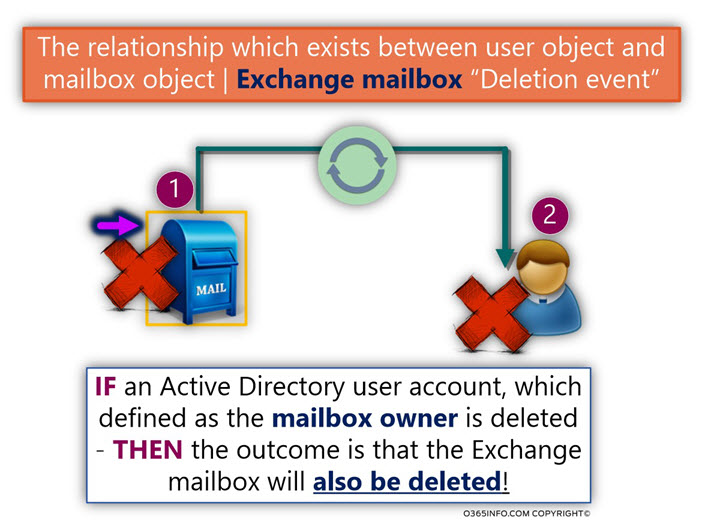 The exciting news is that – the phenomenon which I describe as – “Falling domino effect,” will be realized also in a “restore scenario.” 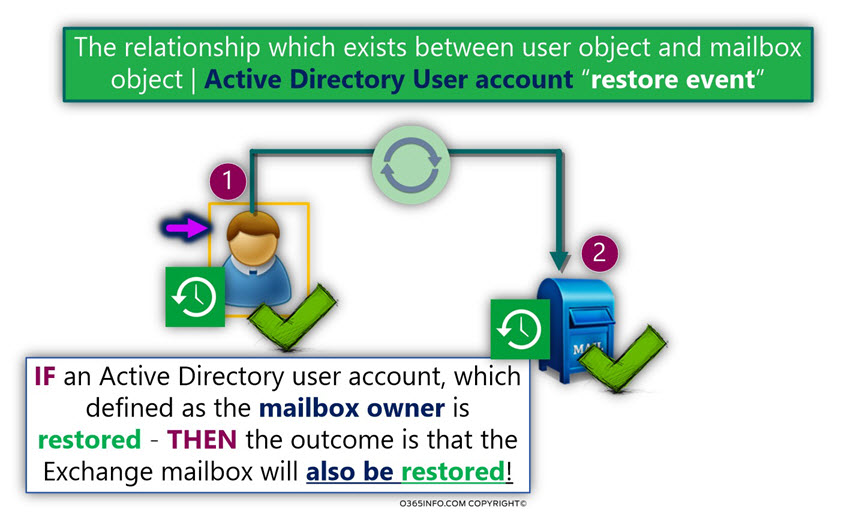 The concept of Recycle bin in the Microsoft-based environment

Along the current article series, we will mention the term recycle bin dozens of times. So, I think it’s worth elaborating on this concept.

In the older days, when we say that we need to “restore” user account or restore an Exchange mailbox, the meaning was – restore information from a backup tape.

For those of us, who had the pleasure to experience restore data from backup tapes, and especially restore an Exchange mailbox, then we can say that the experience was not very pleasant! 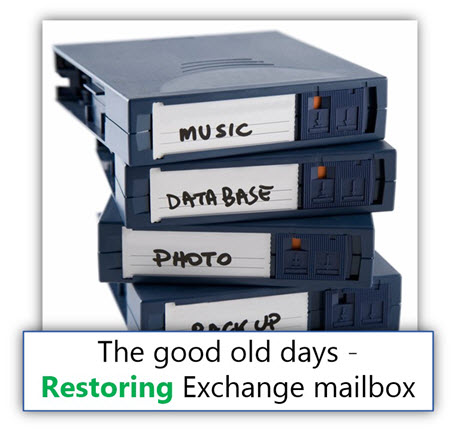 To be able to provide a quick and efficient solution for the need for restoring data, the concept of “Recycle bin” was invented.

The “Recycle bin” can provide salvation for the scenario of – “Oops; I have a feeling I accidentally deleted something that I didn’t want to delete.” 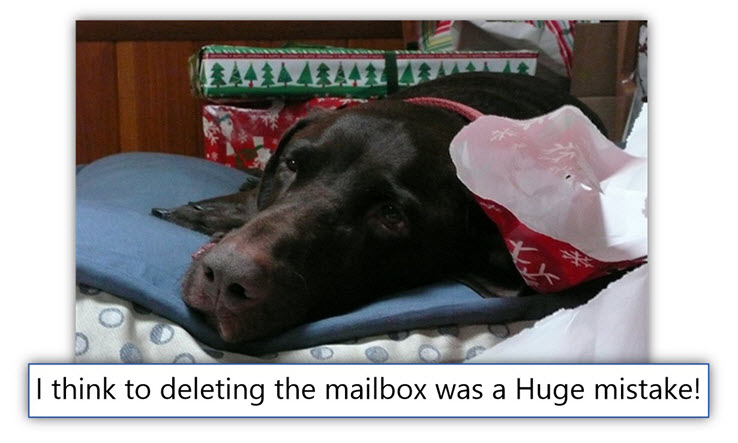 An innocent action of – deleting On-Premise Active Directory user account, can cause a chain of events, which will lead to the deletion of Office 365 user account and Exchange Online mailbox.

In this case, the “Recycle bin,” can enable us to “fix” the mistake that executed very easily.

The main concept of the “recycle bin mechanism” is, to provide a temporary store, for deleted objects.

In case that we need to restore one of this object, we can access this unique store, instead of dealing with a complex operation of restoring data from backup infrastructure. 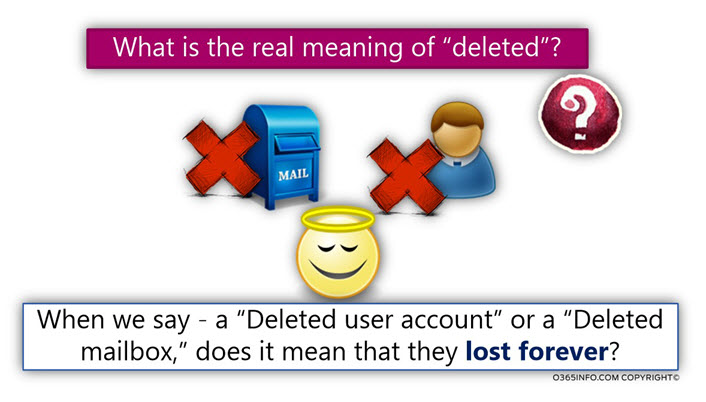 When we use the term such as “deleted user account” or, “deleted Exchange mailbox,” in the first phase the object (mailbox, user account and so on) is not really “distorted” (deleted) and lost forever!

Instead, the “deleted object” sent to a temporary store that provides the administrator a “grace period,” period,” in which the object can retrieve (restored), and turn into “active object.” 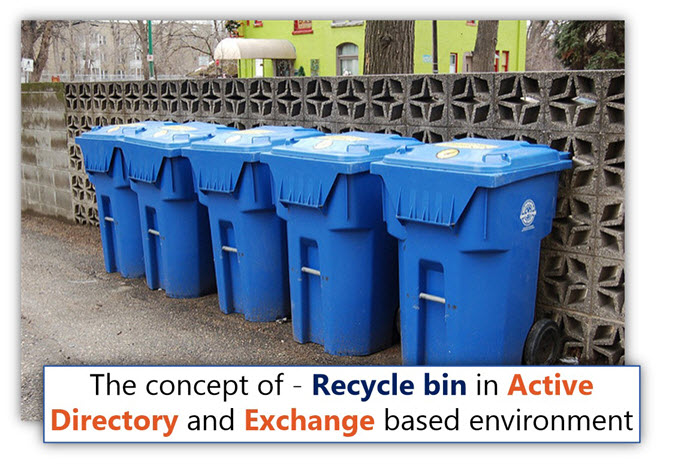 The concept of – “limited lifetime” of the deleted objects stored in the recycle bin.

As mentioned, the “Recycle bin store,” serve as a temporary store for deleted objects.

We use the term “temporary storage” because by default, each object that is “sent” to the recycle bin, have limited “lifetime.”

The reason for the limited lifetime is – to prevent a scenario in which the recycle bin store will grow excessively.

In case that the “grace period” for a deleted object that’s stored in the recycle bin is expired, the object will be permanently deleted or in other words, will be removed from the store of the recycle bin.

The concept of tombstone

When Active Directory or Exchange object deleted, the formal definition for this
the object is – a tombstone object.

We can relate to the term “Tombstone”, as a method that Active Directory or Exchange uses for “stamping” an object that declares publicly as a “deleted object.”

The term “tombstone,” define the “lifetimes of the object.”
In other words, define the period in which the object will be kept in the recycle bin. 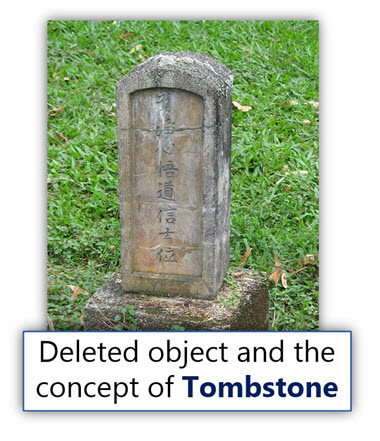 The time in which the deleted objects will keep in the recycle bin defined by a policy.
For example,

Active Directory recycle bin, uses the following value – tombstoneLifetime or msDS-deletedObjectLifetime in Windows Server 2008 R2 for defining the maximum age in which deleted objects will be stored in the recycle bin.

In Exchange based environment, the policy defends as – mailbox retention period.

The concept of Garbage collection

As mentioned in the former section, by default, each object that sent to the recycle bin store, is stamped as a “tombstone object,” and have a limited lifetime.

The Recycle Bin includes a built-in mechanism that “scan” all the object stored in the recycle bin, looking upon an object that the lifetime period end.

The mechanism which implements this policy defined as – Garbage collection.

The Garbage collection process, “scan” the “Recycle bin store.” In case that it “notice” that a tombstone object reaches the age of his “grace time,” the Tombstone object will be permanently deleted. 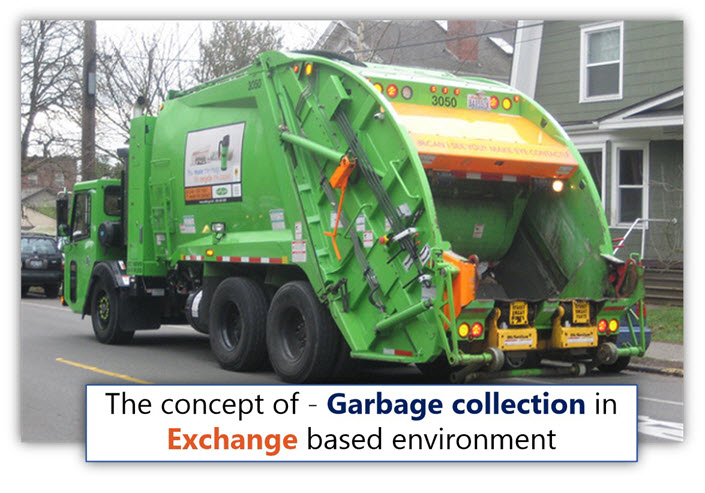 Each Exchange server is configured to use the recycle bin store automatically.

Exchange Online based environment, provide us a “detour” to the limitation of “30-day days retention policy” that applied on – deleted Exchange mailboxes, by using a feature named – inactive mailbox. 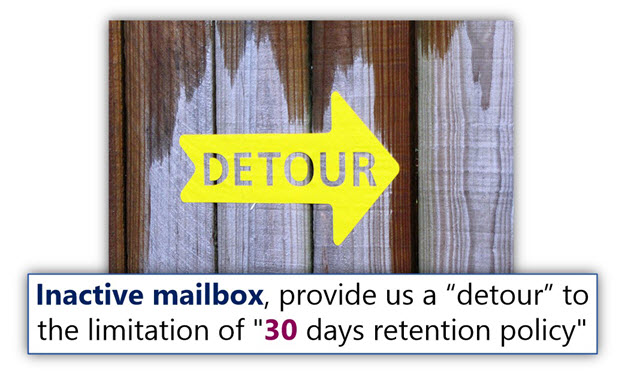 An inactive mailbox is a term that defines a particular Exchange Online mailbox; that was “stamped” or “flagged” as a mailbox that will not be deleted by a garbage collection process when the mailbox reaches the age of “30 days.”

The inactive mailbox considers as a “protected mailbox” because, before the mailbox deleted, the Exchange Online Administrator assign to the mailbox the option of –Litigation hold or In-Place hold.

In this case, the inactive mailbox will “live” for the period that defined by the Litigation hold or In-Place hold policy.

In the former section, we describe the mechanism in which some deleted objects are not deleted immediately, but instead, sent to the temporary store which described as – Recycle bin.

The technical term that we use for describing the operation in which an object sent to the Recycle bin is – Soft deletion.

We can describe the objects that resides in the recycle bin as “Soft deleted.”
The reason for using the term “Soft” is because, the object is not deleted and instead, just stored in a different location (Recycle bin) which enables us to restore the deleted object to his original location. 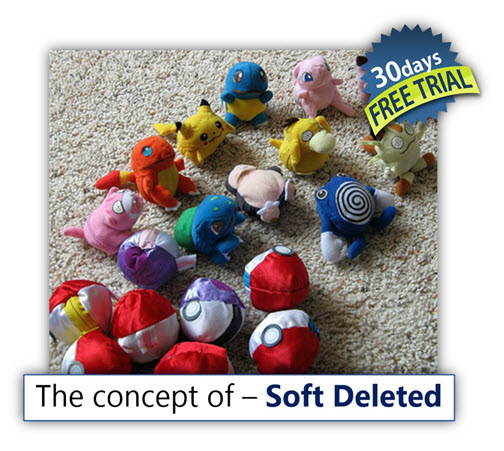 The technical term that we use for describing an object that reaches the “time limitation” in which objects kept in the recycle bin + deleted from the recycle bin described as – Hard deleted.

The reason for using the term “Hard” is because, the object that removed from the recycle bin permanently deleted, and cannot be restored! 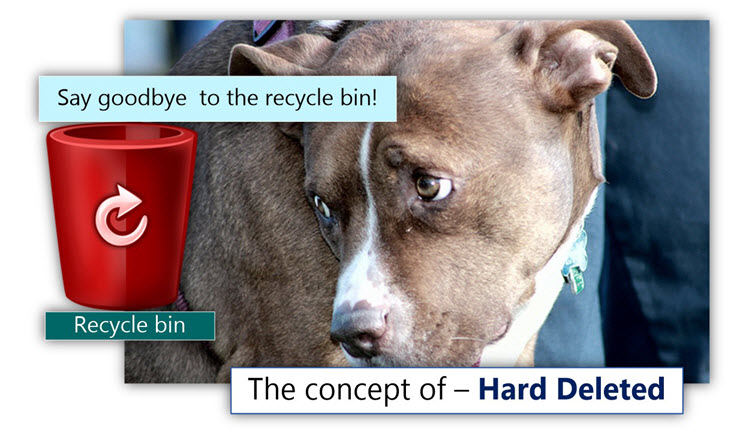 In the following section, I would like to review the characters of Soft deleted briefly, and Hard deleted events, in Office 365 and Exchange Online environment.

When the Exchange Online mailbox is “deleted” (Soft Deleted), the following mailbox properties are updated:

At the end of this period, the object (Exchange Online mailbox) will be permanently deleted. 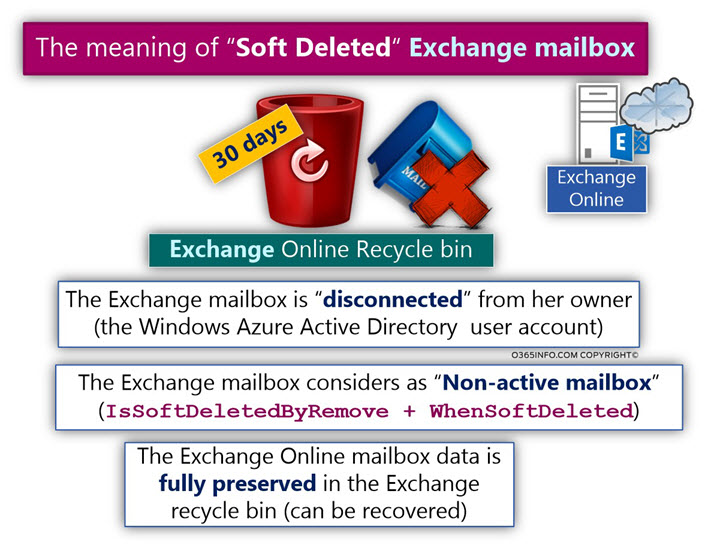 All the Soft Deleted Azure Active Directory user account properties saved, and in case that we restore the user account; the restored user will include all the user properties. 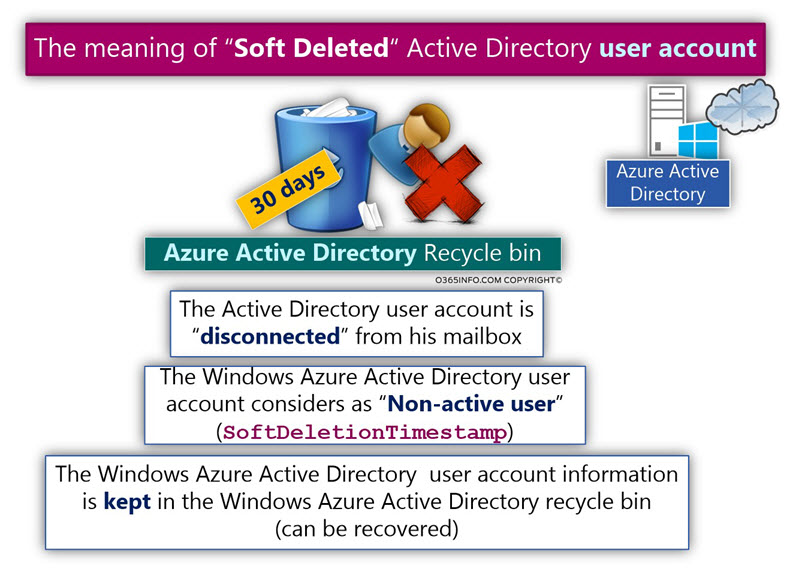 The term “Hard Deleted” define Azure Active Directory user account or an Exchange Online mailbox that was Soft deleted, and reaches the age of 30 days.

Note – at the current time, Office 365 and Exchange Online doesn’t offer any option for viewing the Hard-deleted object list. 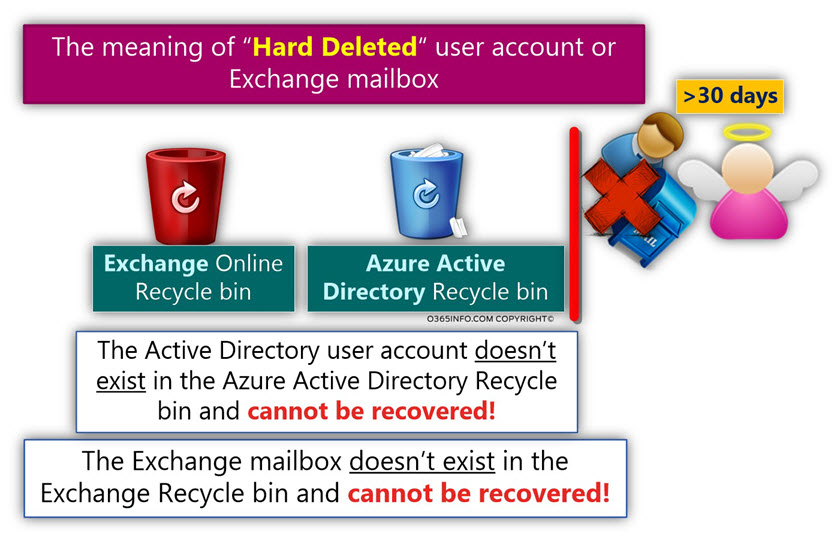 In the following diagram, we can see a representation of the Exchange Online mailbox life cycle that end as – “Hard Deleted mailbox.”

Phase 1#3 – The Exchange Online mailbox begin as an “Active mailbox.” 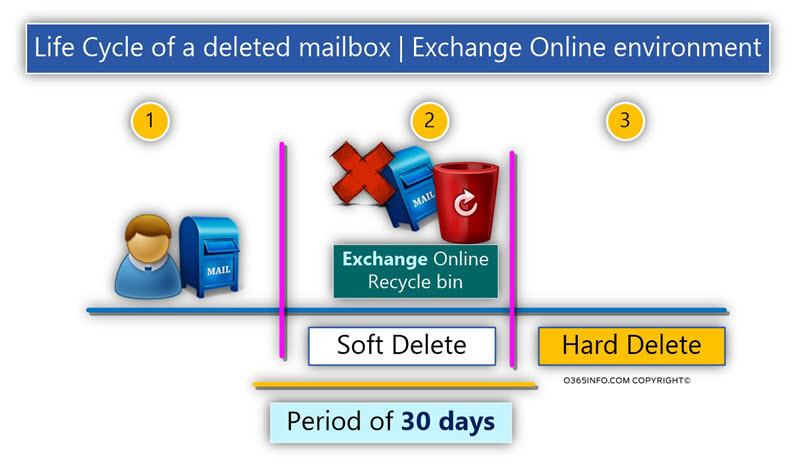 Attached quotes from the Microsoft article about the concept of disconnected mailbox, soft deleted and hard deleted mailbox:

There are two types of disconnected mailboxes:

A Hard-Deleted user mailbox is a mailbox that deleted in the following cases:

The user mailbox has been soft-deleted for more than 30 days, and the associated Azure Active Directory user has been hard-deleted. Check out the Remove-MsolUser cmdlet. All mailbox content such as emails, contacts and files will be permanently deleted.

The user mailbox has been hard-deleted from the Azure active directory recycle bin or has been deleted using the Remove-Mailbox -PermanentlyDelete cmdlet and parameter in Exchange Management Shell.

The “visibility” of soft deleted and hard deleted objects

In this section, I would like to briefly review the subject of the “visibility” of Soft Deleted and Hard Deleted objects such as – Azure Active Directory user accounts and Exchange Online mailboxes.

For example, a standard Exchange Online recipient cannot send E-mail to a recipient whom his mailbox was soft deleted or continue to have access to a mailbox that was Soft deleted. 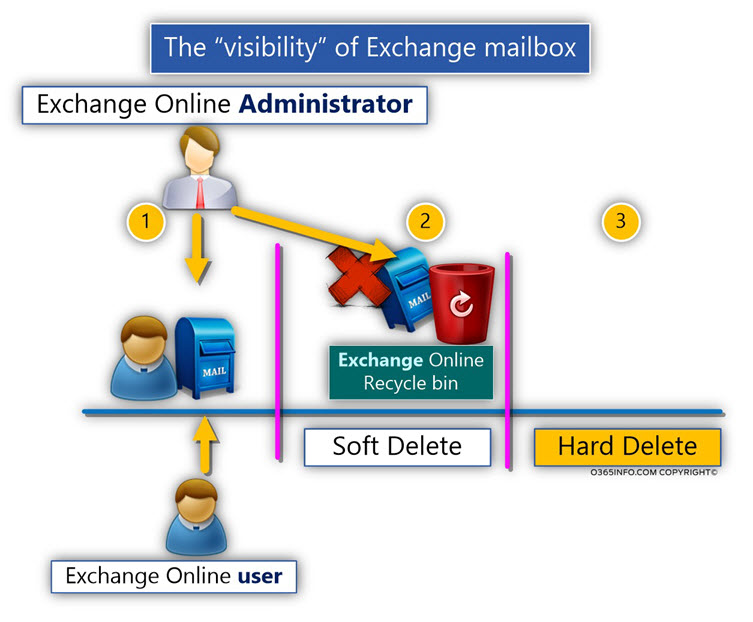 In a scenario of Mixed + Directory synchronized environment, we have four different recycle bin infrastructures:

The reason for mentioning this “complicated recycle bin infrastructure” is because, later, when we review a “deletion scenario” in the Directory synchronized environment, it’s important that we will be aware of all the “components” that involved throughout the process.

In the following diagram, we can see the “recycle bin infrastructure” in the Mixed + Directory synchronized environment. 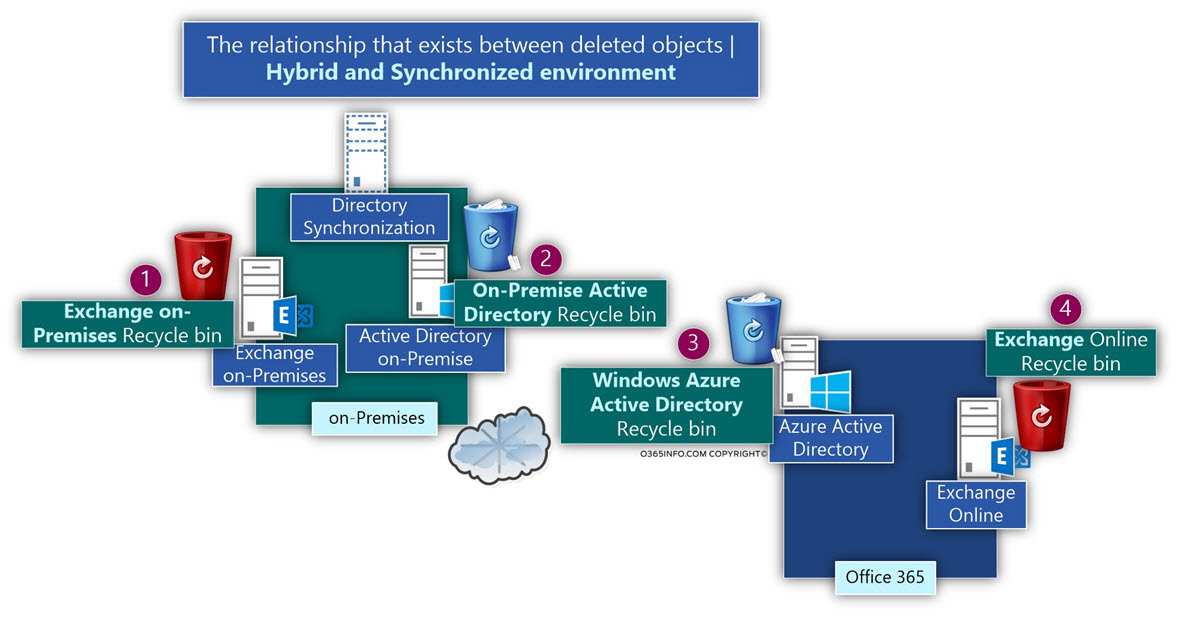 The next article in the current article series

What are the possible causes for an Exchange Online mailbox deletion? | Part 3#23

In the following article, we will review the restore process of the Exchange Online user…

In the current article, we describe characters of a typical Exchange Online mailbox restore mistake…

What are the possible causes for an Exchange Online mailbox deletion? | Part 3#23

In the current article, we review the possible causes that lead to a scenario, in…